Photovoltaic (PV) panels (also called solar electric panels) convert energy from the sun into electricity. For building applications, a number of PV panels are normally connected together, wired in parallel, to form a PV array. Most panels are fitted to existing roofs or walls using an external framework. There are also solar tiles that replicate the appearance of traditional roofing tiles or slates. PV panels may also be ground-mounted.

PV panels are composed of a number of cells containing a photovoltaic material; this is usually silicon, a semi-conducting material.

Photovoltaic panels generate electrical power by converting solar radiation into direct current (DC) electricity, which is in turn converted to alternating current (AC) electricity by an inverter. A typical domestic system would be rated at 2 to 4 kilowatts-peak (kWp), whereas commercial roof-mounted systems can range from domestic size up to 1000kWp for very large roof areas.

PV arrays can create DC at elevated voltages and it is not normally possible to completely isolate the DC electrics between the PV array and the DC isolation switch. Additionally, PV modules are current-limiting devices, meaning fuses are not likely to operate under short-circuit conditions. This could mean a fault in the system goes undetected. This scenario can present electric shock risks, although these can be minimised by good system design, product selection and installation practices.

In the event of the AC supply to a building failing (for example, owing to a local power cut or a fire), the inverters are designed to shut down automatically. However, the solar DC supply (from panels to the DC isolator) will still be live during daylight. It may therefore still be necessary to manually isolate the DC cables and components from the PV panels, which will otherwise remain live. For most installations, the isolation switches for DC cables are situated in the roof void.

If a fire damages the DC cables from the PV array, for example, by burning off insulation, there will be risk of electric shock from the exposed DC conductors.

PVs will work, to some extent, in any weather so long as there is daylight. They can still generate some electricity on a cloudy day.

Concerns have been raised regarding the presence of heavy metals in some specific types of PV cells, and whether such metals can be or are released during a fire. Therefore, while such risks are considered to be low, as with any fire involving electronic elements, caution is needed in dealing with fire-damaged components and residues because a variety of heavy metals and other toxins may be present.

Inverters are complex electrical units and are typically expected to last for 10 to 15 years. In dwellings, they are typically located in attics but may be located in utility rooms or garages.

One of the most common locations of PV fires is in the connection points between components. It is advised that all properties with PV systems should have a sign located near the supplier cut-off point to notify anyone working at the property that there is a solar panel electrical system. In all cases, this presents a potential electric shock hazard. 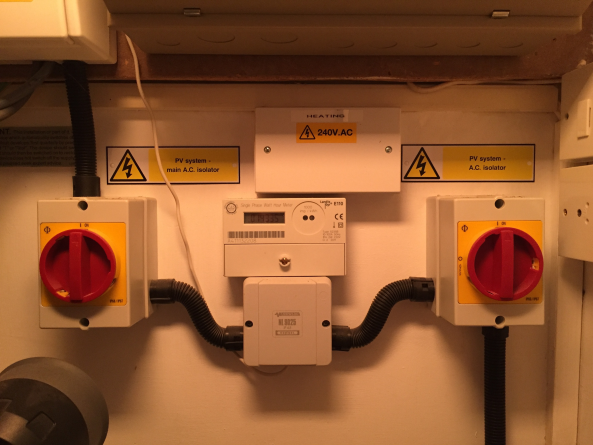 From the fuse box, the electricity will either be used in the property or connected to a generation electricity meter to feed the excess electricity either:

In domestic properties and on large industrial buildings, solar panels can be installed on the roof. They are typically mounted on south-facing roofs, but it is important to check all sides of the property, as some may be located out of sight of the road. The roof is usually pitched and panels are mounted at an angle to maximise exposure to the sun.

Panels are likely to be firmly fixed, although more advanced systems could include an automatic solar tracker, which adjusts the panel's tilt to an optimal angle. PV modules also come in a range of shapes and sizes; while most are bolted on top of the roof, they can also be integrated into the roof or designed to replace ordinary roofing tiles.

PV panels can be mounted on the ground on metal frames. These are likely to be large commercial solar projects with a large number of solar modules. It is again possible that such frames will have solar tracker abilities to adjust the tilt of the panels, to optimise their exposure to solar radiation. Such projects will have large-scale inverters and significant national grid connection points. 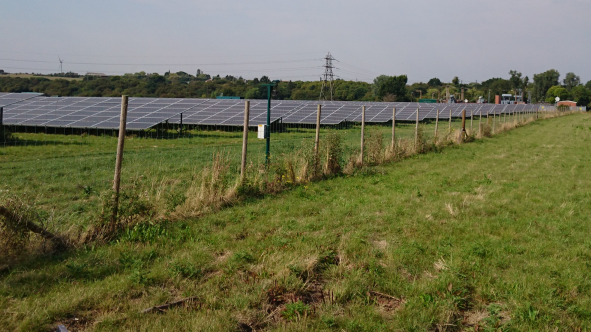