Buildings that are unoccupied, derelict or awaiting demolition

Buildings that are unoccupied, derelict or awaiting demolition

Buildings that are unoccupied, derelict or awaiting demolition may be well-secured to prevent trespassing or unauthorised habitation, but may also restrict access and egress. Security measures to doors or window openings include:

Although buildings should be secure, security features may not have yet been installed or may have been compromised to gain unauthorised access resulting in the presence of:

There may be vandalism and theft, with damage to internal and external features. This may include:

Although buildings may appear to be unoccupied, the property owner or management company may have 'property guardians' living in the building to provide security and general maintenance.

Although the building may appear to be empty, personnel should not assume that utilities have been isolated.

The previous use of the building should be considered to assist in identifying hazards - an abattoir may present a biological hazard or a vehicle servicing premises may have inspection pits, for example. Depending on the previous use of the building, dust may have collected on surfaces such as rafters, roofs, suspended ceilings, ducts and other equipment. If the dust is disturbed, a serious explosion could occur. The build-up of even a very small amount of dust can cause serious damage.

The structure of a building will deteriorate through being left open to the elements or without maintenance. This may result in additional hazards including:

When buildings are in disrepair or scheduled for demolition, systems may be made redundant or often reclaimed for salvage. Compartmentation may be compromised if salvageable items have been removed, such as piping and wiring, and possibly doors or timber floors. A demolition project may involve:

On smaller demolition sites, combustible materials, such as timber, may be burned on-site to reduce costs. This may result in firespread and larger fires that are left to burn uncontrolled.

Demolition sites may contain a variety of hazards including: 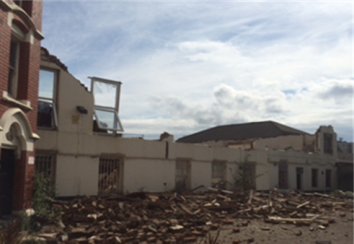 Façade retention is a specialist area that involves installing temporary supports - often a large frame - to hold up the façade before (not after) the rest of building is taken down. Any incident involving freestanding, unsupported, tall masonry walls presents a high risk of collapse without warning. 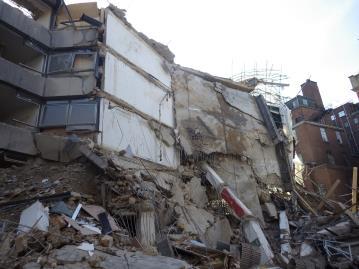 Full demolition is more commonly performed using specialist high reach equipment, such as hydraulic 'nibbling' equipment, creating ramps out of demolition rubble to enable them to reach higher up the structure. On larger sites, flammable and hazardous materials should usually be removed before demolition.

Using explosives for demolition is strictly controlled, and they should be securely stored until the time of detonation. Buildings due for explosive demolition should have been stripped out and prepared. This usually involves considerable pre-weakening that can leave a structure vulnerable to high winds or other disturbances. If pre-weakening has been carried out ready for controlled demolition, collapse could occur without warning.

Explosives are used only in small quantities and will not be brought to site until shortly before the demolition. However, in some cases placing and connecting explosive charges may take several days, during which time the demolition contractor should ensure the site is not left unattended.