The core principle of triage is to do the most for the most. The initial triage method in a multiple casualty situation is the triage sieve.

The triage sieve will identify immediately life-threatening problems based on the C < A B C > system and correctly prioritise the patients for treatment. Not doing this will potentially risk lives.

All fire and rescue services should be aware of this system and be prepared to employ it in a multiple casualty situation or at a major incident.

As a principle, in a poorly resourced scene, minimal casualty care is carried out in a multiple casualty situation. The following list provides guidance on what could be achieved without breaching the core principle of triage:

With the publication of the 2013 Ambulance Clinical Practice Guidelines (JRCALC) it was acknowledged that now ambulance services are all practising C < A B C > in their initial patient assessment, the standard triage sieve needed to be updated to take account of the importance of initial assessment and treatment of catastrophic haemorrhage.

The diagram below is the new National Ambulance Service Medical Directors Group (NASMeD) Triage Sieve, which was published in 2013 for use by all ambulance staff at a major incident (NARU, 2013).

The priorities are described as:

The JESIP casualty triage has an additional priority: 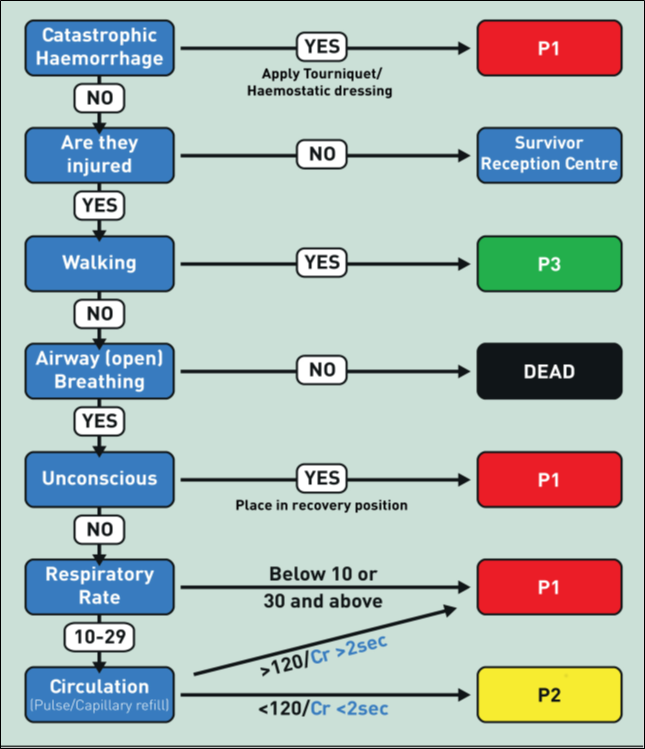 The same triage principles apply to children. Paediatric triage tape is available, which groups children by length, weight and age and provides normal physiological values for respiratory rate and pulse in each of the groups to carry out the triage process.

Having labelled the casualty with their priority, casualties are handed over to an appropriately trained and competent practitioner. A record or log of the numbers of each priority should be kept.

When referring to casualties and the above categories at the scene of an incident, everyone should be sensitive to those who may be nearby, which could include relatives and other members of the public.