Generic information about fire suppression, firefighting media and techniques can be found in National Operational Guidance: Fires and firefighting. Fire and rescue services may need to consider and use a range of tactics and tactical modes when dealing with wildfires.

Refer to the Tactical mode section of Incident command: Knowledge, skills and competence and to the Control Measure: Risk assessment at an incident in National Operational Guidance: Incident command for further guidance on tactical modes.

The main types of suppression tactics that can be implemented during a wildfire incident are:

Direct attack is where personnel and resources work at, or very close to, the burning edge of the fire. During direct attack, firefighters attack the fire aggressively by using hand tools and beaters and/or by applying water and/or retardants.

Direct attack can be applied on different parts of the wildfire: 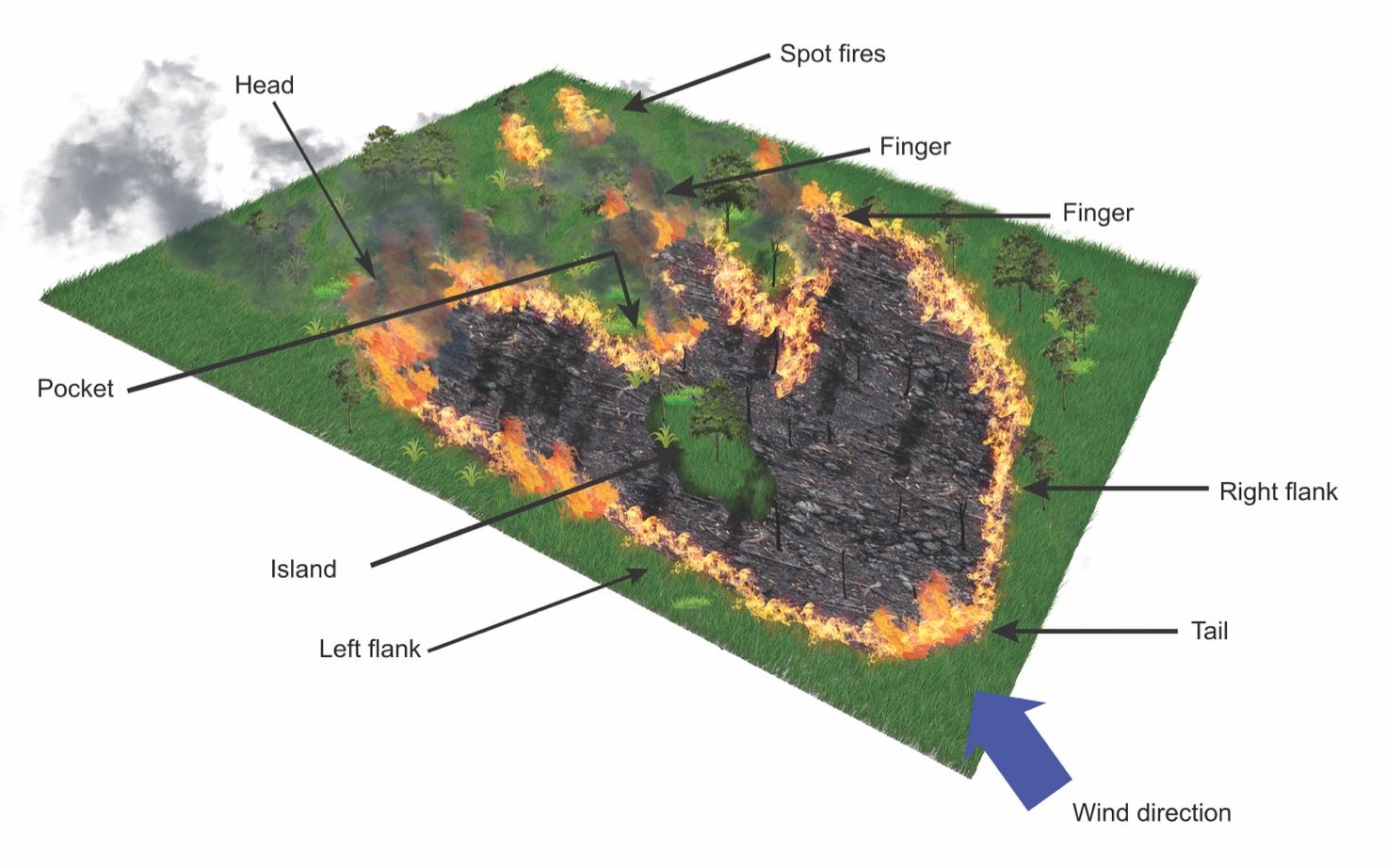 Illustration showing the parts of a wildfire

Direct attack using hand tools, beaters and knapsack sprayers can be a very successful suppression tactic when deployed against fires of low or moderate intensities (flame lengths up to 1.5 metres). Applying water and/or foam retardant using pressurised systems may still prove a successful suppression method for fires with flame lengths of 1.5 to 3.5 metres. Personnel working with hand tools, such as beaters, should be withdrawn from the attack until flame lengths are reduced below 1.5 metres.

When using direct attack, personnel and vehicles should always approach and attack the fire from the rear and, where possible, work from an area of fuel that has already been burned. This prevents personnel and vehicles from being deployed in unburnt fuel in front of an advancing fire, which presents a significant hazard. It also helps to reduce the likelihood of personnel or vehicles being outflanked by the wildfire.

If personnel are tasked with using hand tools, particularly edged tools such as pulaskis or rake hoes, care should be taken to ensure that adequate space between personnel is maintained. The spacing required to maintain safety will depend on the type of tool in use and the task being undertaken. It is generally accepted that the safe working distance for swinging tools is twice the length of the tool plus the length of the arm, or approximately three metres; however, this should be risk assessed on an individual basis.

Indirect attack is where personnel and resources complete suppression activities some distance away from the fire front. This type of attack can be used on flames of any length, but it is often used for high and extreme intensity fires where it is not safe to implement direct attack methods.

There is an important distinction between firebreaks and fuel breaks:

Firebreaks and fuel breaks are two examples of potential control lines. Control lines are constructed or natural barriers, including treated fire edges, which are used to control a fire. They can be constructed manually, mechanically or by applying water or retardants (which are called wet lines).

The minimum recommended width for a control line is 2.5 times the flame length, although it may be necessary or desirable in some circumstances to increase the width of a control line to ensure it is sufficient to contain firespread.

When constructing control lines, it is vital that the rate of firespread is taken into account so that there is sufficient time for personnel to construct the control line and leave the area before the fire arrives. Refer to National Operational Guidance: Fires and firefighting for further information on fuel breaks.

Parallel attack is a specific type of indirect attack where control lines are created along the flanks of the fire towards and around the head of the fire. This suppression method is usually most effective when performed using appropriate vehicles, such as tractors pulling swipes or flails, or bulldozers.

Another indirect attack method is the use of controlled burning. Controlled burns can be lit in advance of the fire to:

Controlled burning at wildfires can be separated into two distinct methods:

Aircraft may be deployed at wildfire incidents to use direct and indirect attack methods.

Each type of suppression tactic has relative strengths and weaknesses. The safety and effectiveness of selecting a particular tactic, at a particular time and place, will depend on a number of important factors, including the:

When selecting appropriate suppression tactics, the following should be considered and identified in the tactical plan:

Flame length can be used as a visual indicator of fire intensity and is a useful guide for selecting appropriate suppression tactics and methods. Personnel should be aware that flame length differs from flame height, as explained in the diagram below.

Wherever possible, personnel should commence fire suppression activities from a strong anchor point to help prevent a wildfire escaping and threatening the success of the operation, and/or the safety of personnel. An anchor point is a location on the landscape that can act as a sufficient barrier to firespread. Appropriate anchor points will prevent a fire burning around and outflanking personnel working near the wildfire. Anchor points may need to be strengthened before use or created by hand or machine. 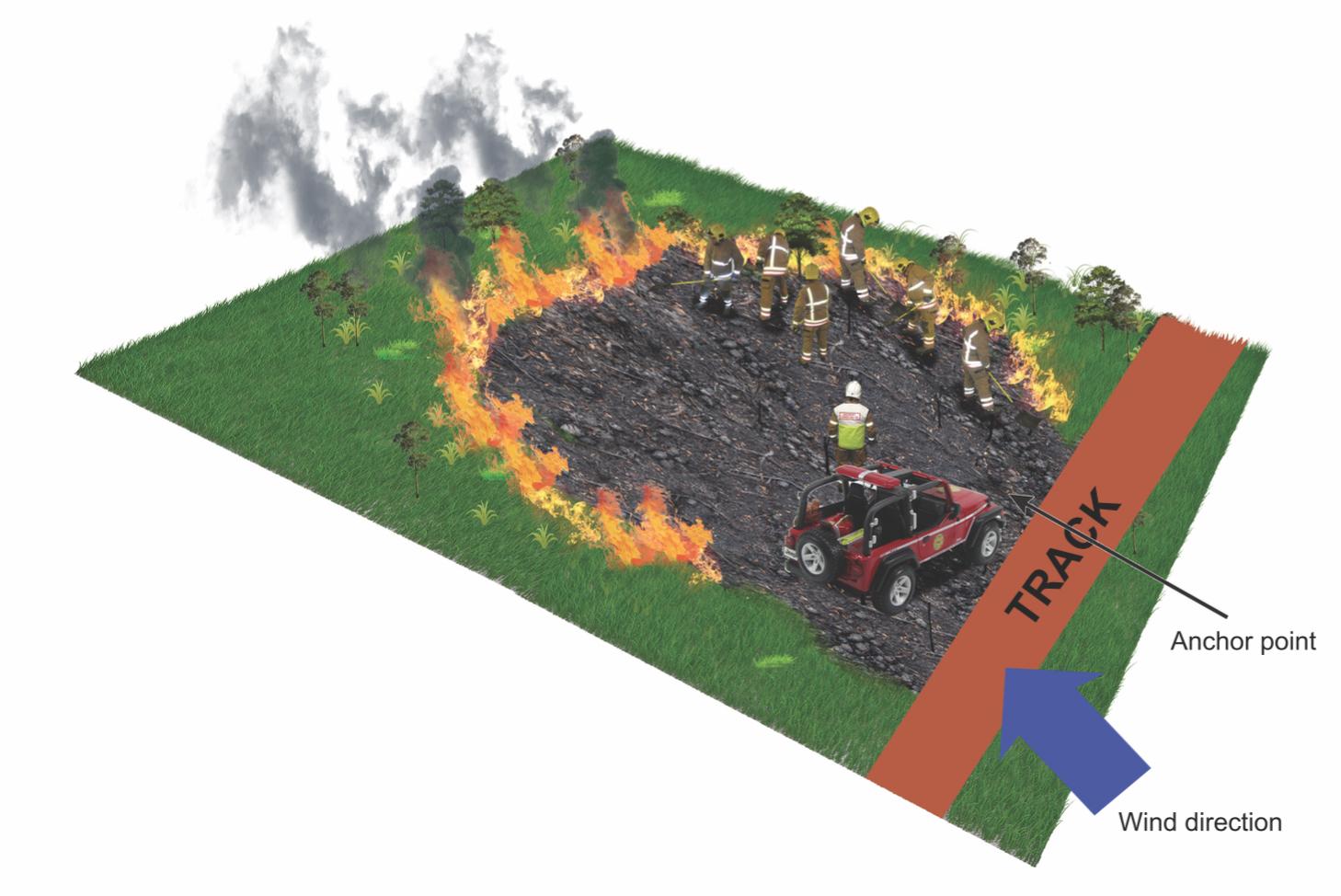 Another important consideration for developing a tactical plan is the time of day. The hours of darkness are generally characterised by cooler temperatures, higher fuel moisture and higher relative humidity levels, all of which can substantially reduce fire intensity. Reductions in fire intensity during the hours of darkness can therefore provide windows of opportunity for suppression. However, there are hazards associated with personnel working at night or during reduced visibility for more information refer to hazard Reduced visibility. Any activities and operations completed during the hours of darkness must be fully risk-assessed, and the hazards must be balanced against the potential benefits. 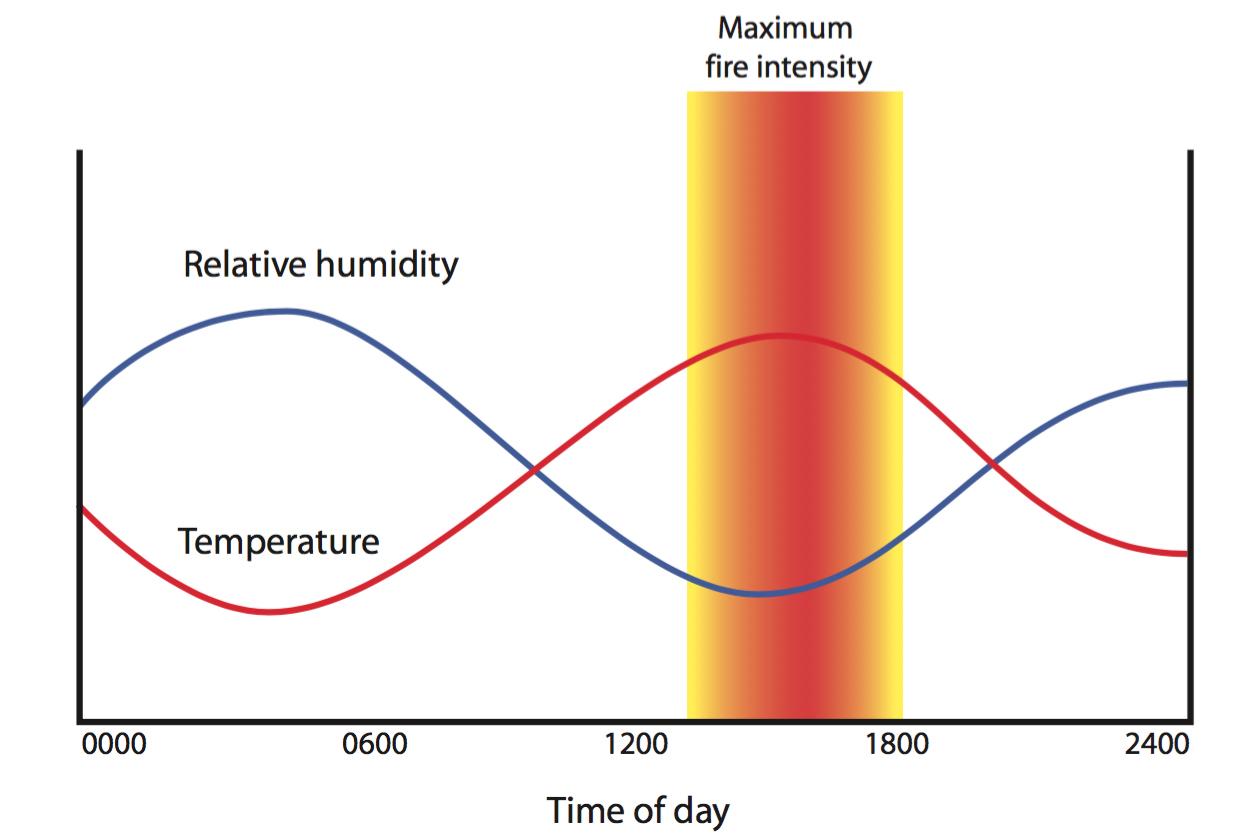