Fire behaviour at wildfire incidents can change rapidly both in intensity and in the rate of firespread. The changes can be brought about by:

The most extreme examples of fire behaviour are caused by a combination of some or all of these factors.

Wildfires only burn uniformly in all directions when they are burning within uniform fuel, on flat ground and in the absence of wind. Typically, wildfires will spread in an elliptical shape because one or more environmental factors act as a dominant force that increases the rate of firespread in a particular direction. The fire behaviour observed at the majority of wildfires can therefore be classified according to the following:

Some wildfires may be significantly influenced by more than one of the above factors. Different parts of the same wildfire may also be predominantly influenced by different factors. It is therefore important that environmental conditions across the whole incident ground are assessed and monitored because changes in fire intensity and rate of spread and the presence of extreme fire behaviour can all represent significant hazards to personnel.

Some of the situations where extreme fire behaviour is more likely to occur include:

Some of the common indicators of extreme fire behaviour are:

Fires, or parts of fires, that demonstrate extreme fire behaviour have been given names that describe their behaviour, such as spot fires, torching, crown fires and the junction zone effect.

Spot fires occur when sparks and embers are transported by the wind or convection column and land to ignite new fires outside the main fire perimeter. During this process, burning material (sometimes referred to as flying brands or firebrands) can be carried considerable distances. Spot fires can breach control lines and can threaten access, egress and escape routes for personnel and vehicles. Spot fires can represent a significant hazard to personnel, particularly if undetected for a period of time (refer to Hazard: Undetected firespread).

Torching is a fire that burns from the ground through the surface and aerial fuels and into the crown of a tree. Torching can occur in areas where there are ladder fuels that can support firespread from the surface into the upper aerial fuels. Torching is normally localised and restricted to single trees or small groups of trees. 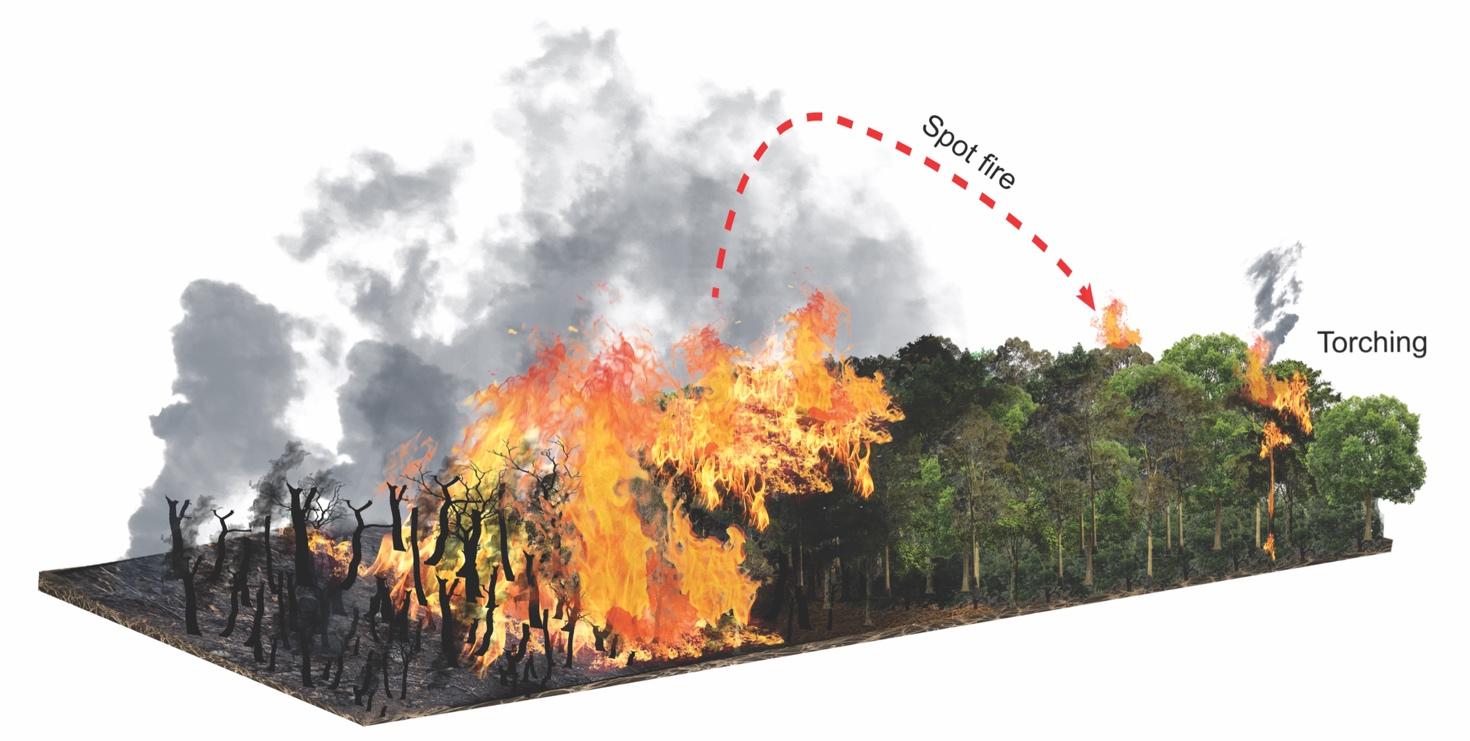 Crown fires are fires that burn in the upper canopy of vegetation. Crown fires can occur in shrubs or trees and their intensity is usually dependent on the amount and condition of the fuel. For crown fires to occur, there usually needs to be sufficient and continuous fine fuels.

The junction zone effect is an increase in fire activity caused by two fires, or two parts of a fire, burning into one another. It is caused by the indraughts generated by each fire drawing them towards one another. This increases the speed at which the fuel is consumed and the subsequent intensity and rate of spread. The junction zone effect can also increase the likelihood of spot fires.