Landfill gas is a complex mix of different gases, created when bacteria break down organic waste within a landfill site. Landfill gas is approximately 40% to 60% methane, with the remainder being mostly carbon dioxide. Trace amounts of other volatile organic compounds comprise a remaining 2% to 10% including nitrogen, oxygen, ammonia, sulphides, hydrogen and various other gases.

The amount of these gases depends on:

For example, if the temperature or moisture content of the organic waste increases, gas production will also increase. The production of these gases generally reaches a peak in five to seven years, but the landfill process can continue to produce gases for more than 50 years.

Methane is a major component of natural gas; it is highly flammable and can form explosive mixtures with air if it concentrates in an enclosed space with poor ventilation levels. The range of air concentrations at which methane levels are considered to be an explosion hazard is 5% to 15% of the total air volume. Landfill gas explosions are not common occurrences, however.

Landfill gas can spread over large distances and can vent from cracks in the surface of the site, meaning that areas not filled with refuse can contain levels of gas.

A build-up of landfill gas in enclosed spaces, either above or below ground, can ignite. This will cause an explosion, and can result in structural damage above ground and possible subsidence over small or large areas of the landfill surface, if the build-up of gas is underground. Plant or personnel could become engulfed in a resultant underground void.

The gas poses an additional risk as it can burn with an invisible flame. Particular care should be taken if a fire is present on any site, especially in or around any excavations or trenches. In addition, people in close proximity to uncovered refuse can be at greater risk from a fire on the site.

On larger landfill sites gas extraction can power a gas turbine or internal combustion engine to produce electricity. The presence of these would indicate the hazards of high voltage electricity and gas pipelines on the site.

Biogas is a product of anaerobic digestion (AD). Anaerobic digestion is a natural process where plant and animal materials (biomass) are broken down by microorganisms in the absence of air. On these sites the biomass is held and decomposed in large tanks that produce biogas. The tanks are oxygen deficient.

Biogas is a mixture of 60% methane and 40% carbon dioxide, with traces of other contaminant gases. The exact composition of biogas depends on the type of feedstock being digested.

Many forms of biomass are suitable for anaerobic digestion (AD), including food waste, slurry and manure as well as crops and crop residues.

Microbes feed off carbohydrates and fats, producing methane and carbon dioxides as metabolic waste products. This gas can be harnessed as a source of sustainable energy.

In anaerobic digestion facilities, biogas is produced in large digesters (tanks) and filtered off into pressurised holding spheres. On these sites the risk of a gas leak is always possible, but a fire on the site may require the protection of the gas infrastructure.

Biogas can be used to power a gas turbine or internal combustion engine to produce electricity. The presence of these would indicate the hazards of high voltage electricity and gas pipelines on the site. 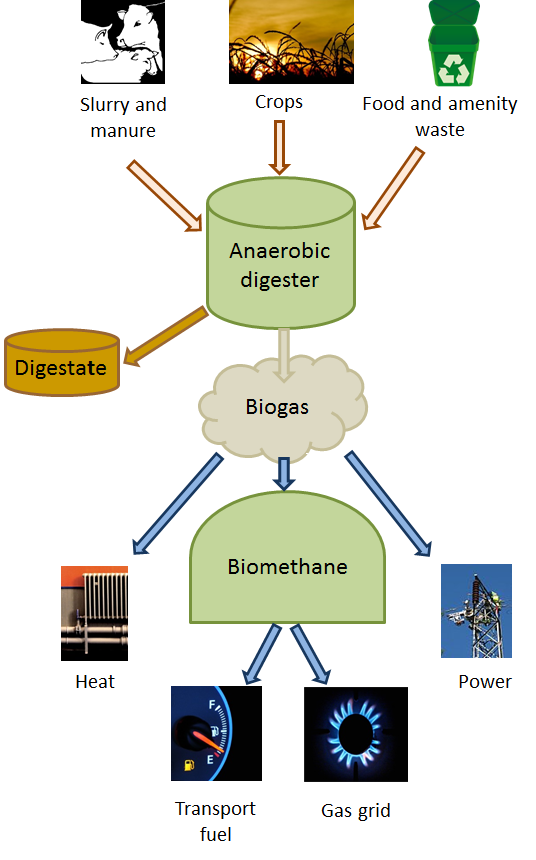 Digestate is a biologically active, aqueous liquid (typically 95% to 98% water) made from leftover indigestible material and dead micro-organisms. It contains valuable plant nutrients like nitrogen and potassium. It can be used as a fertiliser and soil conditioner and is stored in pits, tanks or lagoons. Health hazards may arise from contact with, or immersion in, digestate.