Engines present many significant hazards to responding fire and rescue services personnel, whether running or isolated. Aircraft engines will contain:

Propellers should not be touched. They should be cordoned off and treated as a hazard throughout the incident, as the smallest movement on a propeller can cause fuel to be pumped through the fuel line systems. This may generate ignition sparks, causing the engine to start or turn over.

The hazards posed by exhaust gases and intake air will depend on the size and type of engine involved. Engines that are running should be shut down at the earliest opportunity. Hazard zones in front of engines and to the rear of engines must be established. These hazard areas will differ depending on the aircraft engine size.

Aircraft engines usually come in two types: jet engines or propeller engines. If the engines are running, or have been running, they can present numerous hazards. Engines can generate noise, high temperatures, use oil systems for lubrication, have an electrical supply and have a pressurised fuel system. Aircraft engines are made up of numerous metals, alloys and polymer composites.

If fire and rescue service personnel have to attend an aircraft with engines that are running, the incident commander should ensure that personnel are not put at risk by engine intakes, engine exhausts or propellers that are turning or that have the potential to turn. Intakes are more dangerous than exhausts, as it may be possible for crew members to be ingested through the aircraft engine intake. Safe distances around larger and smaller engines must be considered.

To minimise the risk to personnel of being drawn into engines or being injured as a result of a propeller strike, personnel must not approach the front of any engine that is running or could possibly be running. The recommended safety distance is 10m away from the front and sides of any engine. Engines that are cold and intact should not cause fire and rescue service personnel any problems. Most engines are encased in a cover that has opening cowlings for access to the accessory section; these cowlings have the potential to swing open if disturbed as a result of an accident. 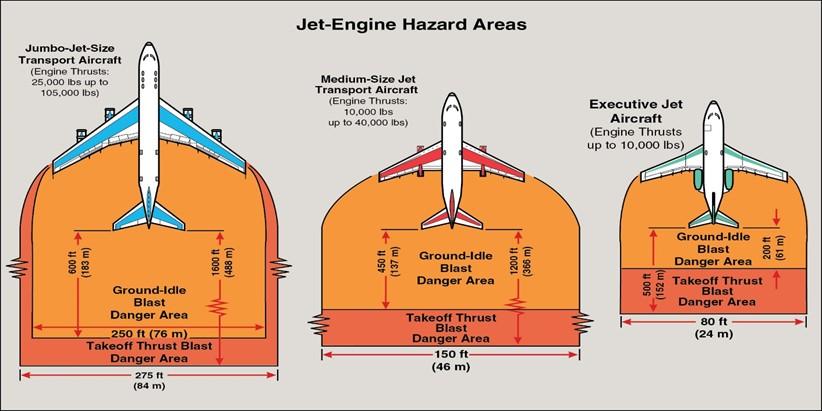 All aircraft (with the exception of some gliders) will have a fuel system on board. The size, amount and type of fuel carried will depend on the aircraft, but the hazards will be similar.

One factor related to fuel systems that makes air incidents different from other transport incidents is the volume of fuel that can be involved.

Fuels involved in air transport incidents will range from kerosene, petrol or military fuels, to LPG (in hot air balloons). The principal hazards from fuels in aircrafts are:

Hydraulic fluid systems will be located on all passenger aircraft and on some general aviation aircraft. The systems will be pressurised (in excess of 200 bars) and although the fluid itself is generally fire resistant, escaping hydraulic fluid can become atomised with the resultant fine mist spray being easily ignited.

Two principal types of pressurised oxygen systems are found on board commercial aircraft:

The systems will be under pressure and present a significant hazard if involved in fire.

RADAR systems with differing wavelengths and strengths may be fitted to some aircraft. Some systems may have transmitting devices in the nose cone or side pods, and some may have externally mounted dishes or scanners. Following a crash, inbuilt safety systems may have automatically disarmed such devices, although crews should not initially approach aircraft that are suspected to contain RADAR systems, until it has been confirmed that the system has been isolated.

Due to the nature of aircraft construction and the systems required for flight, pressurised systems and cables will be running through the cabin, albeit behind interior furnishings. Crews should be mindful of any damage sustained to either the interior or exterior of the aircraft, as they could be exposed to hydraulics or moving surfaces.

Older aircraft have cables under tension. These cables run from the flight deck to the control surfaces such as the rudder, elevators and flaps. If these surfaces are moved by either the flight deck crew, or possibly through actuation by external personnel, these cables will move internally.

In the majority of aircraft, the auxiliary power unit (APU) is normally situated in the tail of the aircraft, and oil and fuel lines have to pass through the aircraft.

Where the interior of the cabin has been damaged these cables will form a significant hazard from entanglement.

Access is normally made through large cargo bays situated beneath the passenger deck or at the rear of military cargo aircraft. Conditions can be cramped as most aircraft use unit load devices. These lightweight containers are used to maximise the space in the aircraft hold.

Hazards inside a cargo hold include:

If the incident occurs away from the aerodrome, then the incident commander should liaise with the flight deck crew, if possible, and attempt to gain additional information from specialist advisers if necessary.